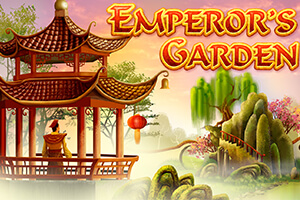 In contrast to the gaudy symbols, frenetic pace and blaring soundtrack of many high-energy online video slots, the Emperor’s Garden slot from NextGen Gaming is an island of soothing oriental calm. The five reels and 25 paylines hover frameless against the sinuous wall of the Emperor’s Garden, topped with red tiles and golden dragons. A koi pond dotted with lotus blossoms lies beneath the reels, with carefully cultivated trees and flowers filling out the landscape.

Even the Poker Symbols Get Garden Touches

The familiar poker symbols crop up in the Emperor’s Garden slot, but the designers have at least taken pains to create a font that looks vaguely Japanese. The 9, 10, J, Q, K and A are each rendered in contrasting colours, each one decorated with a flower, bonsai tree or statuette that can be found in Japanese gardens. Prizes for five Ks or As on one payline are 250 coins, which is higher than the poker values for many other slots.

The Emperor’s Garden slot’s themed symbols include a summerhouse pagoda and a waterborne lotus blossom. Each one wins the same prizes for three, four or five matches: 25, 50 or 500 coins. A lion statue bringing good fortune pays prizes starting from two matches, as does the highest-value payline article, the Emperor himself. His prizes are 3 coins, 50 coins, 1,000 coins and 5,000 coins, respectively.

A magnificent garden scene, with a willow bending over a lake on a rocky promontory, is enclosed in an intricate formal frame as the Emperor’s Garden slot’s Wild icon. Whenever it appears, this Wild can expand to fill the whole reel, with a spectacular waterfall added to the icon.

The Wild wins no prizes in its own right, but can substitute for all other payline symbols. This creates the potential for the expanding Wilds to yield some excellent multiple rewards on the same spin. During free spins bonus rounds, any wins that include Wild substitutes are multiplied by X3.

Even the Scatter is Exquisite

The Emperor’s Garden slot’s dedication to Japanese aesthetics and formalised beauty extends to its Scatter symbol. Two goldfish, one a deep coppery red and the other a true gold, are arranged in the familiar ‘yin/yang’ mandala of Zen Buddhist philosophy. The circular symbol is encased in an intricately carved jade square. Whenever the Scatter is involved in a win, the fish swirl apart in a brief but beautiful animation.

The Scatter gives the player two ways to win. For two, three four or five Scatters anywhere on the reels, the player wins 2X, 5X, 20X or 100X the complete spin bet. Three or more Scatters also activate the free games feature, giving the player 10 free spins like punters discover offers in cricket betting online. The expanding Wilds and trebled bonus prizes can make this round the Emperor’s Garden slots most profitable.